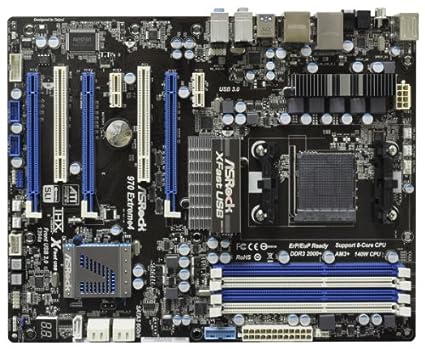 To our way of thinking this means that the Extreme3 would more fairly be called the FX Average. The natural consequence, unfortunately, is that there are signs of cost cutting such as the way that the chipset and power regulation heatsinks attach to the board with plastic pop pins. AsRock has also gone for the ASRock 990FX Extreme4 AMD SATA RAID approach when it comes to the colour scheme.

The PCB is dark brown which is fine and the expansion slots and memory slots are black. There is no colour coding or labelling for the front panel headers and memory slots, all of which makes the PC build more tricky than it needs to be.

In fairness the five SATA ports are labelled, which is handy as ports one and two are positioned towards the foot of the board which is counter-intuitive. The lack of colour coding is annoying as the manual refers to memory channels A black and B blackwhich really doesn't help.

It took us a couple of attempts to install the memory in the correct slots to get the PC running in dual channel mode. ASRock has provided six fan headers on the FX Extreme3 two four-pin and four three-pin and devotes a section of Hardware Monitor to fan control.

This seemed like a good starting point as the fan on our CPU cooler was roaring away at high speed. It turns out that the default setting is Full On so we switched to Automatic and then chose a target temperature and fan speed.

Unfortunately the noise from the fan was only reduced slightly. At standard clock speed the PC Mark 7 figure of 3, marks is exactly what you would expect to see.

That's a modest attempt at overclocking and we really didn't expect any problems. In the end, all of this is not too surprising. A fan outperforms a heatsink if you can call it that, its more like a metal lid. If you ASRock 990FX Extreme4 AMD SATA RAID to put this system in a case, I could only imagine that the results would be much more dramatic.

The fan would probably show a bigger lead. I do have to make one last comment about this.

I would like to see how the two would perform when the board is under LN2. One thing Extreme Overclockers have to worry about is frost build up on the board, preventing this from happening can allow us to bench longer. Fans usually help with moving the condensed air away from the board. I would like to see if the fan or the heatsink would be better suited for the task, but that is a test for another time.

First up is the main screen. It ASRock 990FX Extreme4 AMD SATA RAID pretty normal, but there is something missing. Normally this is not a big deal, and in a way really does not matter. Next up is the OC Tweaker page, with the default settings displayed. I really like how ASRock sectioned all the categories into appropriate groups. Each sub menu is very clean.

ASRock Releases the 990FX Extreme9 Motherboard For AM3+ Processors

You are given three save slots with this board, and as you can tell I have already used that feature. I also like where they are located. Most of the time this option is stored somewhere else in the BIOS. The OC Mode has 2 different settings: